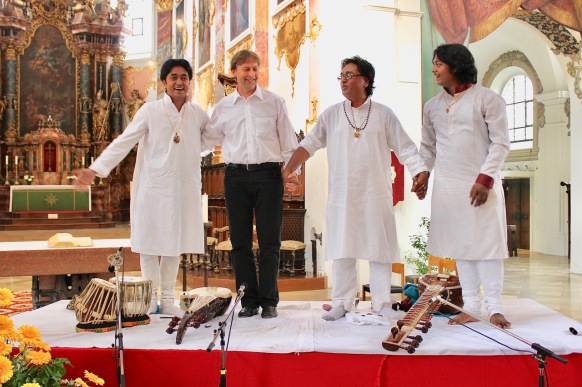 As with past productions, this latest CD of the Maharaj Trio, „Celebration“, breathes the spirit of the centuries-old classical Indian musical tradition of the Maharajis from the holy pilgrimage town of Varanasi, who for many generations now have cultivated and developed the musical heritage of the ”true” India: ”extravagant” melodies based on ancient ragas, full of subtle emotions and grace, spiritual depth and flow, intricate flourishes and creative improvisation. This music stirs the soul of the listener; its sound finds resonance.

This time Pandit Vikash, Prabhash and Abhishek Maharaj approached a friend of theirs, a European musician whose musical roots are to be found in the sacred music of Western Europe. Ralf Klotz has for many years now devoted himself in equal measure as a church musician and music teacher to classical and popular works, both of other composers and of his own composition, in the fields of instrumental and choral music. He has also appeared in concerts with the Maharaj Trio on several previous occasions.

Ralf Klotz arranges the Maharajis’ songs in prominent fusion style and complements them with his own improvisations. In this crossover CD he enters into a respectful synthesis of stylistically typically Indian phrases and popular-jazzy tonal possibilities. In addition, he expands the arrangements by including a wide range of colourful and diversified instruments. Ralf Klotz contributes two songs of his own composition (”Freedom of Soul” and ”Celebration”) and allows his daughter Alina Klotz, who has already won several music awards, to join in, enhancing the music with her voice and violin.

The result is this CD, which has been entitled ”Celebration” – after all, what could be more appropriate for this symbiosis of classical Indian and Western sacred music? A celebration both in a general and in a religious sense. Nine songs which celebrate and honour the meeting and fusion of two worlds. The prevailing mood of the songs is a meditative, soothing one. Catchy refrains that invite one to sing along alternate with elaborate and virtuoso solo improvisations. Time and again, lively dialogues arise within the solos.

Pandit Vikash Maharaj (sarod player/composer) was born in 1957 in the 14th generation of the prestigious & oldest family of musicians in Varanasi, India. 38 years of a successful international music career have given him many opportunities to perform and record with numerous internationally recognized musicians, such as John Handy, David Friesen, Paul Horn, Patrick Bebelaar, Prof. Ban Konrad, Tom Bailey, Wise Guys

(a cappella band), to name but a few.

Over 150 different CDs, LPs and DVDs bear witness to his achievements worldwide. His name appears in Prof. Joachim-Ernst Berendt’s highly-esteemed classic book and documentary ”The World Is Sound: Nada Brahma: Music and the Landscape of Consciousness” as the world’s most prominent spiritual musician of the 20th century.

In 2008 Pandit Vikash Maharaj was the first Indian sarod player to be invited to perform before the New Zealand Parliament. The Indo-German Society of Remscheid, Germany, awarded him the title of ”Professor” in 1995 for creating a cultural bridge between Indian and Western classical music.

In 2014, the U.P. State Government of India honoured him with the highest civil award, ”YASH BHARATI”, for his outstanding contributions to Indian classical music. Pandit Vikash Maharaj has worked as a visiting professor at several famous international universities, including Berkeley Music College, San Diego City College, the Bach Music Academy, Cologne Music and Dance University, the Vienna Philharmonic (Department of World Music) and the University of Auckland.

He has acquired a great number of followers and students all over the globe. He also has been associated with Nobel Peace Prize holder Kailash Satyarthi and his organisation B.B.A., working for many years as chairman of the Cultural Forum and fighting for equal rights, peace and education for every child.

In 2015, he received the ”KARMAVEER PURASKAR” Nobel Laureates.

Prabhash Maharaj, the oldest of Pandit Vikash Maharaj’s three sons, started tabla lessons at the tender age of two. As the grandson and disciple of tabla legend Pandit Nanhku Maharaj, he received hard training and hours of daily practice, which have resulted in numerous performances and awards, including six medals conferred by the Government of India and two national scholarships as the best tabla player.

Prabhash Maharaj was already on tour internationally as a professional percussionist from the age of 19 onwards. He has appeared at countless international and national music festivals, such as WOMAD, Splore, San Francisco Jazz Festival, Ganga Mahotsav, Kalidas Sangeet Samaroh, Tanzbrunnen with the Wise Guys, and many more besides, in the U.S.A., Germany, Italy, New Zealand, France, Switzerland, Austria, China, Japan, Thailand, Singapore and Australia. Prabhash Maharaj also has Master's degrees in music, sociology and NET-UGC from the University Grand Commission of India.

An internationally acclaimed sitar player from India, Abhishek Maharaj is a musician in the 15th generation and the son of Pandit Vikash Maharaj. He has performed to enthusiastic audiences at music festivals around the globe, such as the Diwali Festival in New Zealand and music festivals in Italy, France, Switzerland, Austria, Germany and elsewhere.

Abhishek Maharaj is well known for his unique approach to his instrument, the sitar, and his vocals. He has a wide understanding of music that sets him apart from other performers. The model and fluency he expresses with his instruments and vocals speak of deep emotions and moods with the clarity and precision of a sitar performer. Abhishek Maharaj has a Master’s degree in music from Banaras Hindu University and has been awarded three medals, including the title of Sangeet Praveen (the highest musical accolade) by the renowned University of Music in India.

Picture on top: "Trio Maharaj and Ralf Klotz after concert in Biberach (Germany), 2015"

is the son of Pandit Vikash Maharaj. Vishal Maharaj is 15th generation of Maharaj Clan. The singer and sarod player has recently joined Maharaj Trio as a guest artist. He is gold medalist by Government of India in instrumental category and holder of master degree in sociology. Composed music for many Indian and international documentary movies. Composer of the track ”Monsoon dance”.

Ralf Klotz (organ, synthesizer, guitar) graduated from Trossingen College of Music, Germany, after six years of studying organ, composition and conducting (choir and symphony orchestra). He taught organ and popular music at the Institute for Church Music in Schluechtern, Germany, and has now been head organist and choirmaster of the Protestant community of St. Martin’s Parish Church in Biberach, Germany, since 1996.

His organ and choir concerts have taken him to the neighbouring European countries of the United Kingdom, France, Italy, Switzerland, and Poland. He published compositions and CDs. In 2013 and 2015 he accompanied the Maharaj Trio for the Holy Water Project and the CD performance ”Celebration”.

Alina Klotz (vocals, violin) has won national and regional awards both for her violin playing and for her singing. She received her musical education at the Landesakademie Ochsenhausen for young musicians and at the Bruno-Frey School of Music in Biberach and Ochsenhausen (Germany). Composer of the song ”Piece of Paradise”.